STOUGHTON, Wisc. — The Stoughton Kubb Invitational is back in its seventh installment and will once again be hosted at Virgin Lake Park. The tournament is hosted by the Stoughton Kubb Club in collaboration with the Sons of Norway Mandt Lodge. Each year has brought a good mix of both local and regional teams of two to six players, typically bringing in over 20 teams.

The plan is to have eight, single game, 25 minute matches to seed the eight team championship bracket. New this year will be a Silver Bracket for those teams who make the top eight, but lose in the first round. The remaining teams will make up the Bronze Bracket.

Trophies and cash prizes will be awarded to the top three teams in the championship bracket. Kubb sets have been freshly painted for this tournament. Pitches will be painted lines, 100 percent inbounds rule will apply, and the neighbor rule will be in effect. No player can throw more than two batons in a row.

Proceeds from the event will go to support local charities. There will be free prizes throughout the day provided by King Oscar. A raffle will also be held for a knife. 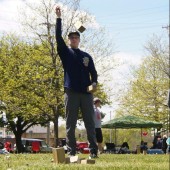