Skuffle for the Shovel 2021 Recap

CONCORD, N.C. — Kubb players gathered just outside of Charlotte in Concord for the annual 1v1 Skuffle for the Shovel on Jan. 23. The winner would have their name added to the coveted Shovel trophy alongside previous winners like Bob Hickes and Mike Davids.

It was a seasonal day in North Carolina, with a high around 50 degrees and plenty of sunshine. There had been little rain recently, so the ground was firm and drilling took extra skill. The Klassic system was used with a 2-4-6 baton start. Play got underway at 11 a.m. After the preliminary rounds, the top seed was Davids, looking to add his name to the shovel for the second time in three years. Second seed was Drew Gander, followed by Nick Bartlett and Leigh Northrup, none of whom had won the tournament before.

Both semi-finals matches ended 2-0, with Davids and Gander advancing to the finals. These two had some history in this tournament—Gander had lost to Davids 2-1 in the previous two tournaments (2020 semi-finals and 2019 finals). Could this be the year Gander finally breaks through?

Play began evenly with both players taking one kubb from the 8 meter line in their first turn. It continued evenly with Gander eventually taking a slight lead of 3-1 baselines. With six kubbs in play, the action was about to start. Gander had a tight drill, and took out all six of his inkasted kubbs on the first baton throw. Unfortunately for him, he missed on his next four batons, and was only able to take out the last baseline kubb with his final baton. On his next turn, Gander left an advantage line, but Davids was unable to close out the game. Gander was able to take game one on his next turn.

In the second game, Drew took an early lead of two kubbs after two turns. Davids immediately came back, going three-for-four from 8 meters on his next turn. With five kubbs now in play, Davids gave up a penalty kubb and then split the uprights on three straight shots. This left an advantage line for Gander, and only one kubb to drill. With the entire tournament now in hand, Gander was unable to take advantage, only removing two of the three remaining baseline kubbs. On his next turn, Davids gave up another advantage line, and this time Gander was able to remove the four field kubbs, the one remaining baseline, and the king. Gander won the match 2-0, and with it the tournament title.

The next tournament in the Carolinas will be the Spring Fling held by Queen City Kubb in March. Keep an eye out for more information soon!

Drew Gander celebrates with the Skuffle for the Shovel trophy.

A video of the finals match courtesy of Raleigh Kubb 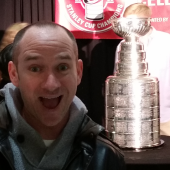 Skuffle for the Shovel 2018 Preview