Skuffle for the Shovel 2020 Recap

CONCORD, N.C. — On Saturday, Jan. 25, 2020 eight kubbers gathered in sunny Concord for the Skuffle for the Shovel. There is no greater individual glory in the East Coast kubb community than getting your name forever inscribed on the infamous shovel trophy that comes from winning the 1v1 tournament!

Now in its fifth year, the Skuffle for the Shovel is the only 1v1 kubb tournament on the East Coast. It was an all East Coast affair with players representing Queen City Kubb, Raleigh Kubb, and Keystone Kubb in attendance. Defending Champion Mike Davids was looking to secure his second straight shovel and join Michael Roberts as the only player to earn their name on the shovel twice. Of course, the other seven players and especially Roberts himself, were determined to not let that happen. With temperatures in the mid to upper 50s and little-to-no wind to speak of, conditions were nearly perfect for all of the competitors. A drenching rainstorm the day before left the pitches soft and drilling conditions were excellent all day.

Fairly standard U.S. National Kubb Championship rules were used, except Tournament Director Davids elected to try out the 3-6 open instead of the standard 2-4-6 used in many tournaments. After five Klassic system qualifying rounds, the top four seeds heading into bracket play were Bob Hickes of Keystone Kubb, Davids of Queen City Kubb, Drew Gander of Raleigh Kubb, and Leigh Northrup also representing Queen City Kubb. After one game quarter-final matches, the top four seeds held their positions and the tournament semi-finals were set. Davids squared off against Gander in one semi-final and Hickes took on Northrup in the other.

In semi-final number one, Hickes defeated Northrup 1-0 in a shortened match.The other semi-final was tightly contested the whole way. Davids and Gander split the first two games forcing a deciding game three. Each player was fighting hard to advance to the tournament final. The third game was another close one, with defending champ Davids taking advantage of a couple of unfortunate lines left by Gander to pull out the win and advance to the finals against Hickes.

The final match started off slowly with both Davids and Hickes only picking off one base kubb on their first turns. Davids continued to score one base kubb in each of his next two turns with Hickes coming up empty in turn two. That allowed Davids to take a commanding 3-1 lead in game one. Hickes pulled it back together in his third turn getting four field kubbs with one baton and then going three-out-of-five from 8 meters to take the lead for the first time. After Davids left a small advantage line on the next turn due to an unfortunate penalty kubb, Hickes was able to close out game one.

In game two, Hickes jumped out to a quick lead going three-for-three from 8 meters. Davids answered with one base kubb in both turns one and two, but Hickes again cleared his group of five field Kubbs with one baton in turn three and was able to clear the two remaining base kubbs and the king for a 2-0 win and the 2020 Skuffle for the Shovel title.

The four players that unfortunately lost their quarterfinal matches in the main draw continued to compete in the consolation bracket. The consolation finals pitted Das Kubb teammates Nick Bartlett against Michael Roberts, with Roberts coming away with the win. 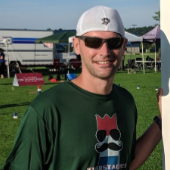